In the current environment with the juggling of home schooling and work there is one thing I am relying on when it comes to keeping Kipper entertained. Craft kits! We have been trying out a few recently but to be honest they have been lacking or expensive. That was until we tried out a ToucanBox kit. Which if I am honest has left me wondering why we haven't tried them before. 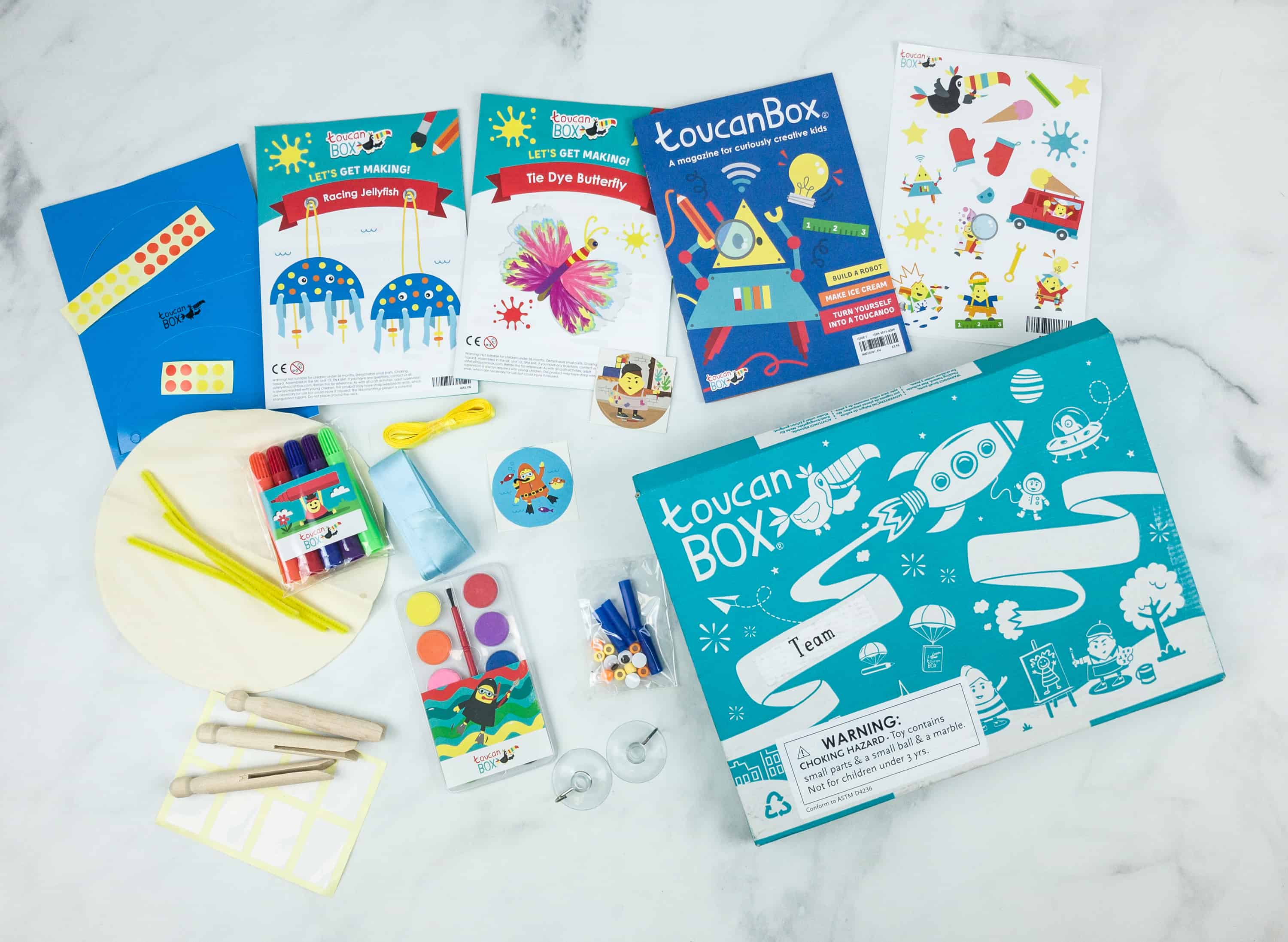 As this was our first box all we did was go onto the ToucanBox website and choose two crafts from the selection offered. Online each of the crafts available gives you an age range and also some key words to describe it. Such as role play, nature and free-thinking. I really like that I can choose a craft for both Kipper's age range 3-5 and Monkey's 5-8. Or even a craft they can both do at 3-8. Once you have selected your first box then you can decide the length of the monthly subscription. Since this was a trial we did not select a monthly commitment at the time but I will be signing us up. For reasons I explain below.

What do you get in the box? 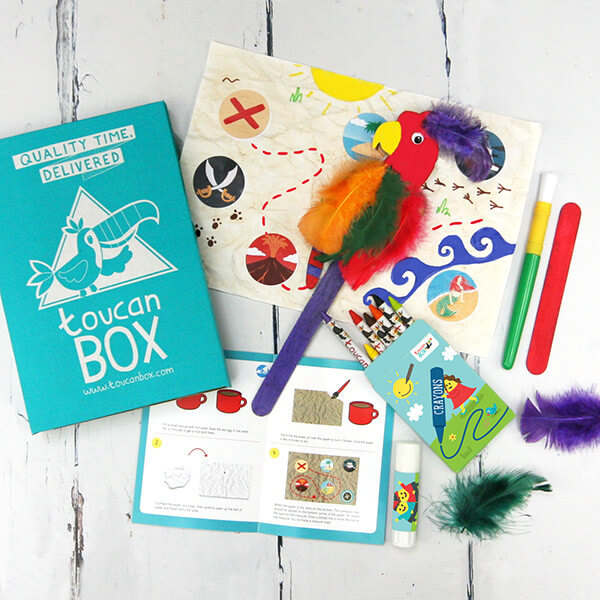 First of all the box is thin enough to go through your letter box. I selected to have it addressed to Kipper and he was very excited when he saw it had his name on it. The top of it opens to reveal two separate sealed compartments each containing one of the crafts. Plus there is a little surprise and a magazine. I really like how each craft is sealed off from the other since it means we could do just one and leave the other for another day. While still keeping it a surprise.

The magazine is large and colourful and a real added bonus. It has some ideas of crafts and STEM activities to do at home. Plus there are games, activities and stickers all designed to engage with the audience.

The crafts we chose 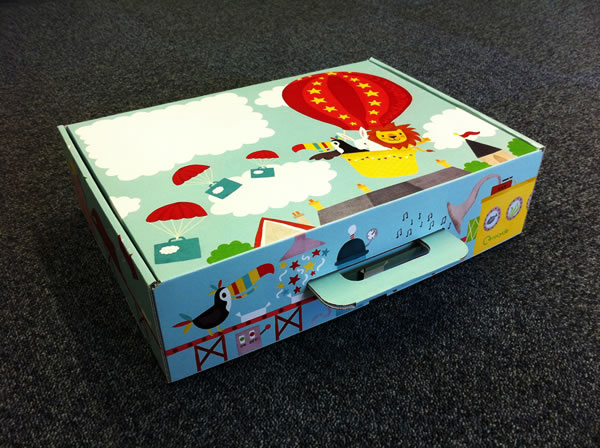 I chose two crafts one for each of the boys. However Kipper enjoyed his so much that he would not take no for an answer and ended up doing both of them with a little help. I had opted for Racing Jellyfish and a Dream Catcher. Both them appealed for different reasons. The jelly fish I knew would be a hit with Kipper as he is very competitive and I knew would enjoy racing them. I chose the dream catcher as I thought it may help with sleep as both have been a little unsettled with everything that is going on.

Within each compartment you get everything you need to complete the craft. We didn't even need to find glue. Plus there is a little leaflet which tells you step by step what to do and if you need scissors. The instructions are bright and colourful and come both in pictures and words. So Kipper could easily understand what to do, and follow them despite not being able to read. 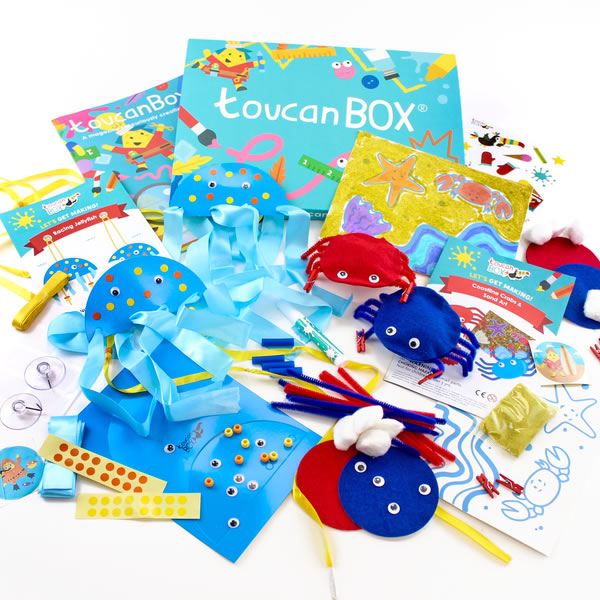 Kipper opted to do the Jellyfish first. It took us around fifteen minutes to complete the craft. The materials are really good quality with plenty of ribbon and extra googly eyes and beads supplied. Perfect for little figures who have a tendency to drop and loose things. The craft was aimed at children between the ages of three and five. At four Kipper could do all of it by himself and did not need a hand with any of it. Even managing to thread the ribbon through the holes and pieces of straw himself.

Once the jellyfish were finished we used the included suction hooks to put them on the kitchen units. Then all you need to do is pull each side of the ribbon and watch the jellyfish race upwards. Kipper thought it was great fun especially when he won. They have have been hanging in the kitchen for the last few days and I often catch the boys having races together. 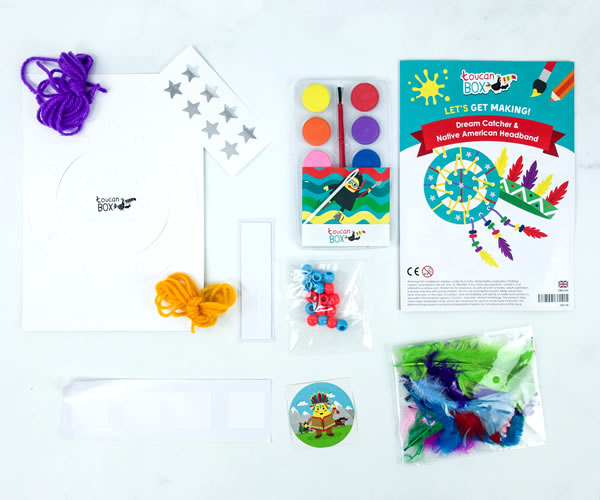 Initially I chose this activity for Monkey to do. However Kipper was desperate to do the second craft as well. So I agreed. Despite the price I was impressed to find that the dream catcher and some of the feathers were made from wood. The cord is suede and there was a mini paint pallet and decent sized paint brush also included. Which we have since used for painting pictures at home after completing the craft.

This kit was aimed at children between five and eight, so Kipper did need some help with the tying of the beads and feathers. But he enjoyed sewing the cord through the centre with the plastic needle which was also included. This craft took us longer at around half an hour but he was engaged throughout and got some much needed fine motor skills practice in.

I was very impressed with the quality of the materials we were set. Especially when you consider the price. Kipper really enjoyed the crafts and has already asked if we can get another blue box soon. The fact that everything is included and I don't need to worry about picking up any other materials to make the contents is really appealing. Especially at the moment. The magazine is a nice added extra with some activities to tide us over until we receive our next box. 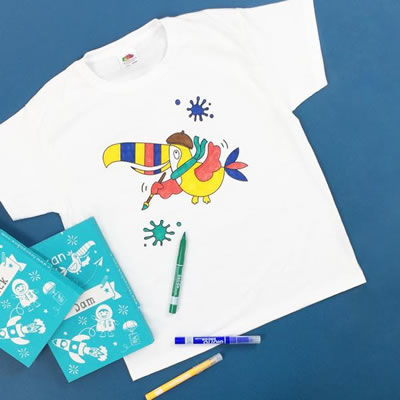 You can choose a three month, six or twelve month subscription at outset. Monthly subscription of $13.95 plus $2.95 postage and packing a month only. I also really like the fact that you are not tied into it other the initial period you can cancel at any time. If you would like to try out a toucanBox then use code MUDPIETOUCAN for 50% off your first box, meaning your box will cost just $13.95 with postage.