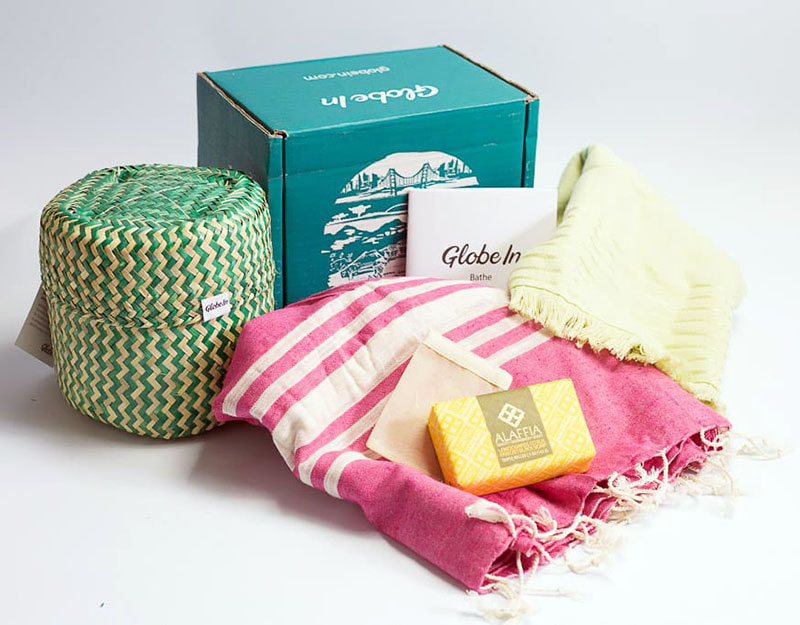 The GlobeIn Artisan Box Club is a subscription that sends handcrafted beautiful, distinct products from around the world, delivered to you each month. All items are produced either by collectives that are fair trade certified or that respect and adhere to fair trade principles. All artisans and farmers whose products are distributed by GlobeIn are paid a fair wage for their products.

Like the Instagram-famous FabFitFun, GlobeIn doesn't constrain itself to a single category. While most of its monthly boxes include some form of artisan homegood, they might also contain jewelry, clothing, drinks, and snacks. Yes, it's broad, but if you like the general concept of cozy home goods and artisan products, you will probably like at least some of GlobeIn's offerings.

GlobeIn also has the distinction of offering a preview of their box each month, and giving subscribers the chance to select which version of the box they'd like to receive. None of the options looking appealing? 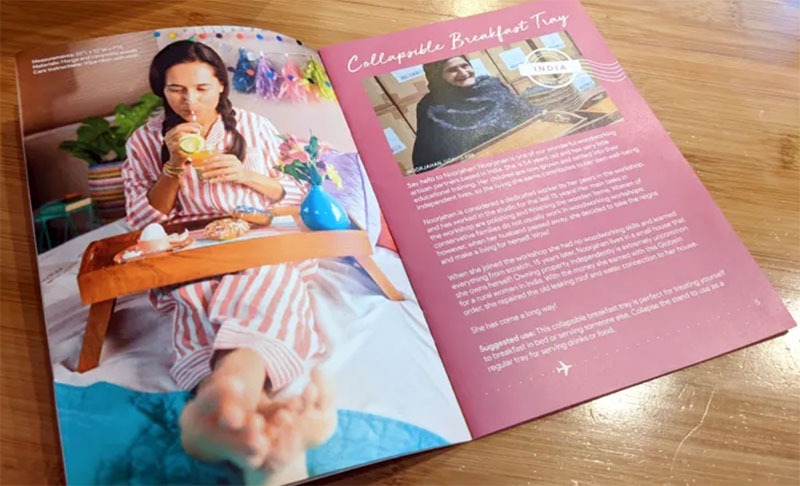 No problem. Subscribers can skip a whole month and get the cost of the box credited toward products from GlobeIn's store instead.

Each GlobeIn Artisan Box comes with a full-colour guide to contents. It tells you where the products were made, who made them, how to use them, and what impact your purchase has on the lives of the makers. 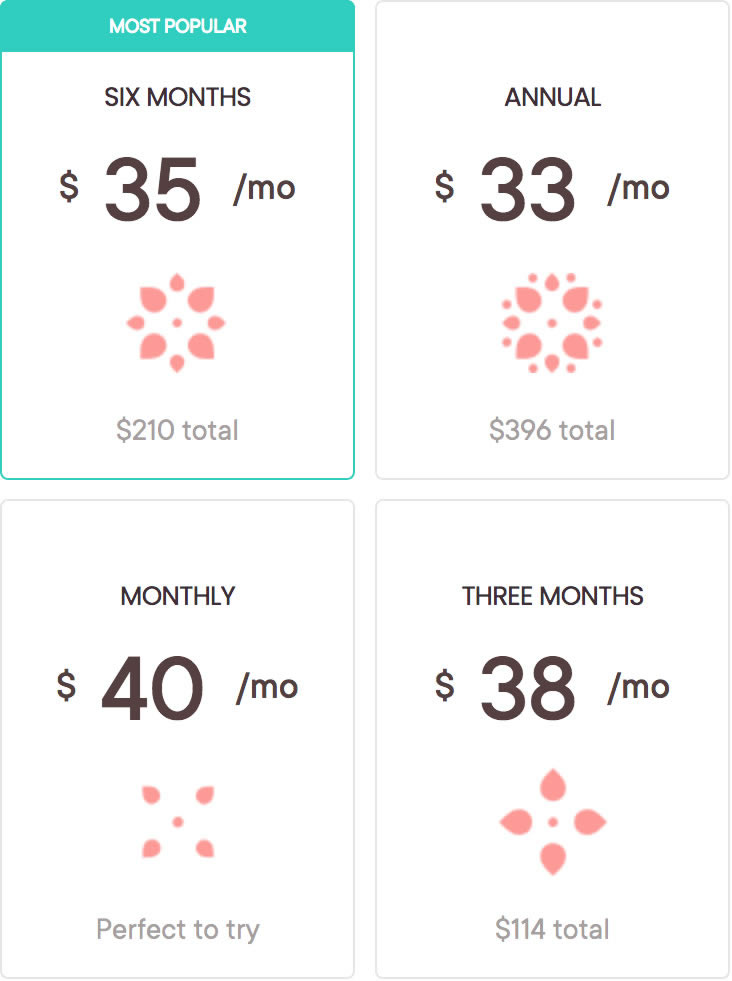 GlobeIn Artisan Box has a single subscription option, the Premium Box starting at $33/mo. (all prices in USD). Each one is approximately $70 in value and includes four to five handmade items by artists from around the world. Subscribers can also choose additional products to customize their box. Shipping in the U.S. is $10/mo.; shipping to Canada $22/mo. (your first box ships free); and international shipping is $25/mo.

Everything we liked about GlobeIn box

We had a lot of fun receiving our box from GlobeIn. Getting a package in the mail is always fun, and since we hadn't peeked at GlobeIn's preview, we were especially excited to find out what was included. Opening up the box, we felt exactly the way we wanted to feel: like someone had sent us a present just for our surprise and delight.

We were genuinely impressed by the craftsmanship and quality of items (especially that gorgeous breakfast tray). We do think that price is reasonable - and it feels even more reasonable when you look at GlobeIn's commitment to paying artisans fairly. 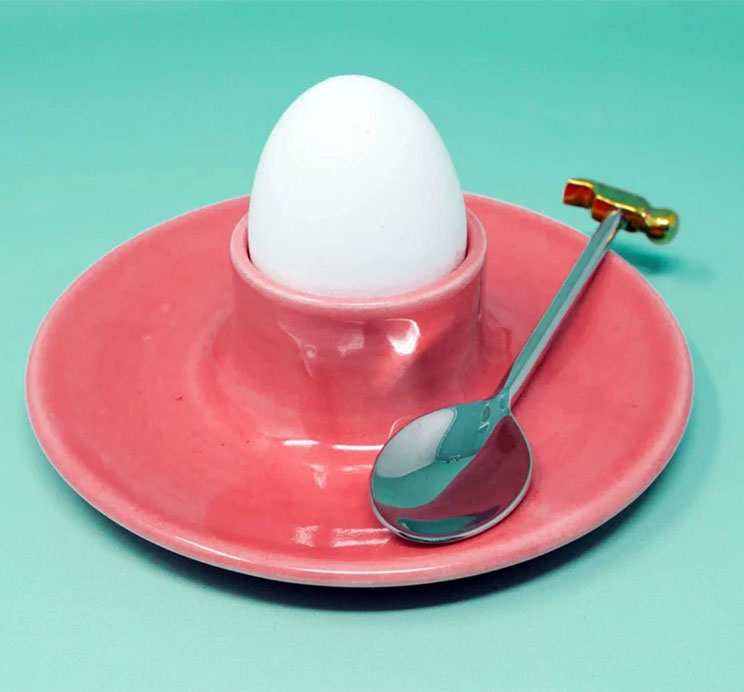 Even though we didn't get the chance to look at the different options for boxes before receiving this one, we love the fact that different options exist. It feels like a huge waste to receive a box full of products only to decide that you don't really want them, so it's really nice that GlobeIn offers flexibility about what you get.

Of the five items we received, we have put three into regular use. This is actually a better success rate than we expected, especially considering how skeptical we were of the egg cup at first. Using the egg cup and spoon has definitely been our favorite part of GlobeIn experience, mainly because we never would have thought to buy either of them. This is really what we want out of a curated subscription box: products that we will love, but that we wouldn't normally buy for myself. The surprise of enjoyment is what makes it feel like a thoughtful gift instead of just a box of random objects.

For all that we enjoyed us experience with GlobeIn, we were left with a few doubts. We wound up liking three of the five items we received, but that means we have two items (the hand-painted cup and the bud vase) that we hardly touch. Maybe we well wind up using these more frequently, or maybe we well just give them away. In either case, it feels a little wasteful to get a whole box if we only really want 60% of the items. It's in the nature of subscription boxes to be mixed bags, so we can't imagine getting a box that we unequivocally loved. That might not dissuade some people from subscribing to GlobeIn, but it does dissuade us.

You might notice this critique isn't really specific to GlobeIn. We might as well own up to it: we a little skeptical of subscription services that don't focus on a specific product. Our ideal subscription service is probably for something like wine, or perfume - products that we enjoy, but that we don't know much about. When it comes to home goods, snacks, and fashion, the simple truth is that we understand our own tastes better than a subscription service possibly could. Even if we bought a box for a fraction of its retail value, as long as it included some products we didn't use, it would be hard to see it as a great deal.

In general, we feel wary of subscription models that ask consumers to make a financial commitment first, and pick products later. We think GlobeIn, as a fairly flexible service, handles this better than many other subscription boxes. But let's be honest. In this model, we aren't just committing to goods - we're committing to consumption. That won't bother everyone equally, and it would bother us less if we had a great plan for our unwanted items.

GlobeIn is a mission driven company empowering hard working people in remote regions to connect to the global market. Each box is curated around a monthly theme by their editor to bring you exciting products that make you feel well traveled and connected with distant cultures around the world.

Should you get a GlobeIn subscription? That really depends. If you love artisan goods, have some discretionary income, and enjoy getting presents (who doesn't), you'll probably find GlobeIn delightful. If you, like we, are a little more of a control freak about the things you buy, it's probably not right for you. Use that money to pick out a monthly self-care gift to yourself instead.

Of course, even if GlobeIn isn't right for you, it could be perfect for someone you love. It would make a really fun, sweet gift for anyone who needs a little help sprucing up their home.

We did have a lot of fun checking out the box and trying out the products. If we were looking to subscribe to a service like this, we would want it to offer beautiful, unique items, and we would want to make sure it was committed to ethical trade. If this is you, GlobeIn could be a great choice.

Everything was well wrapped and protected during shipping. A booklet welcomed us upon opening the box. The back shows a photo of all the items in the box. Inside the booklet is a recipe for One Bowl Brownies!

The theme for this box is the APPRECIATE BOX. Everything inside the box is nicely packed, and some fragile items are also bubble-wrapped for safety. Everything in our GlobeIn Artisan APPRECIATE box!

Hand-woven Palm Leaf Basket – Mexico. We used to getting beautiful, hand-woven baskets from this box, yet we still astonished every time! We know that this one came from Mexico, and we can't help but be more excited. This makes a great storage box or even as a gift box! 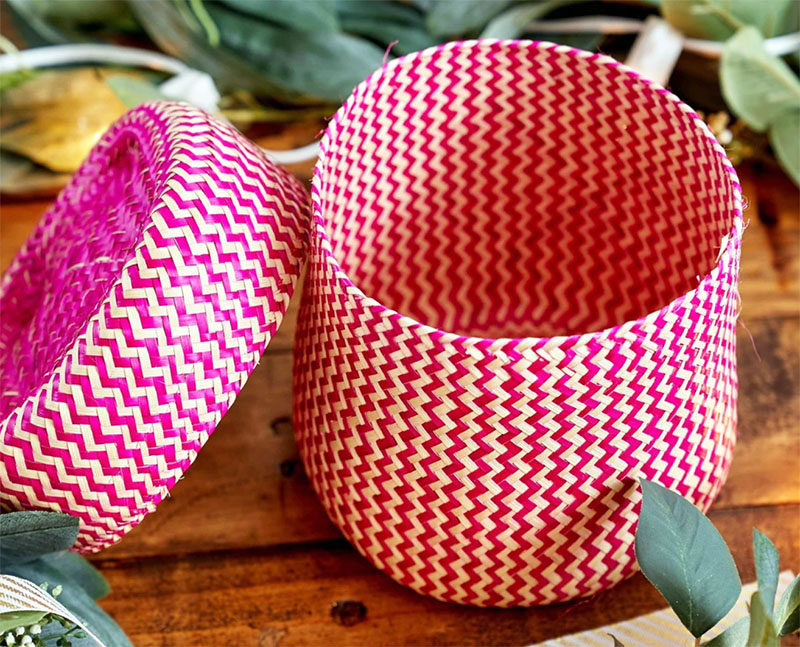 The beautiful basket came with a tag that tells us more about Emilia Garcia Martinez, the daughter of GlobeIn's artisan leader, Juana Martinez. The flip side of the tag features a photo of the lady holding 3 more baskets! These are truly beautiful creations, and anyone who will be receiving these beauties will surely appreciate them. The basket has nice wavy patterns of the natural and the dark pink-dyed palm leaf. The basket is 6″ in diameter and 5″ tall. It's water-resistant as well.

Khaloufi Hand-Painted Rania Mug – Morocco. Morocco is also known for its beautiful ceramic wares, like this hand-painted mug! It's another creation from the well-respected and talented artisan, Abdeslam. The mug has an intricate and eye-catching hand-painted design. Just by looking at it, you'll know how much effort is put into making this ceramic mug. 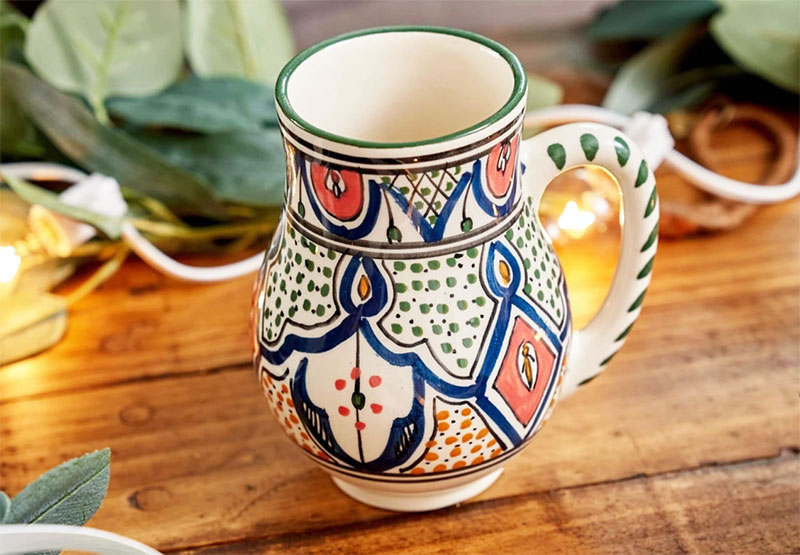 You can use this to craft your favorite hot/warm beverages! When cleaning the mug, it's recommended to handwash it as it's a delicate piece.

Dean's Beans Fair Trade Hot Chocolate – Dominican Republic. We received a mug, so we think getting this fair trade hot cocoa powder is perfect! The package contains 8 oz. (227g) of cocoa powder. It even comes in a resealable pack. It contains organic sugar, organic cocoa, and organic non-fat dry milk. To make the delicious drink, just add 8 oz. of hot water to 2 tablespoon mix in a mug, stir well. It is also recommended to add hot milk. 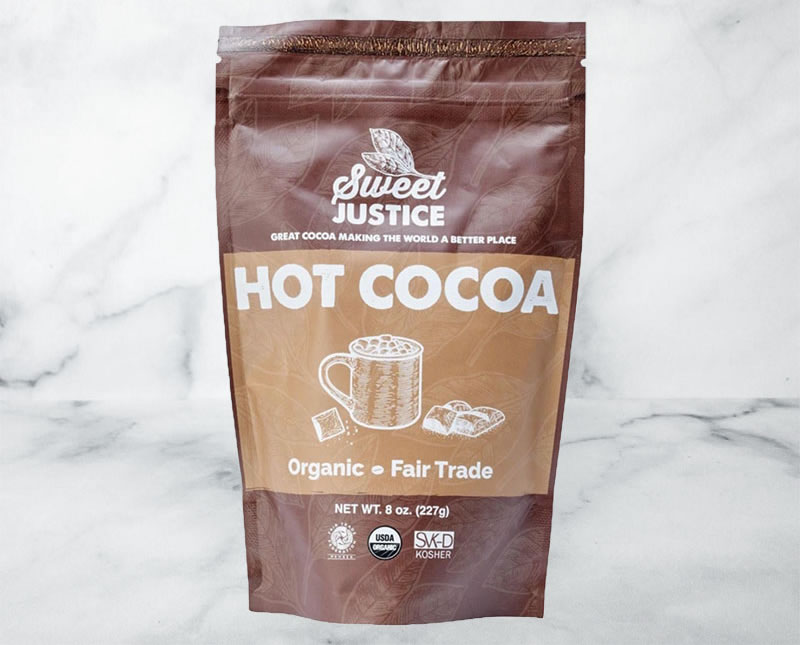 Miskeen Brass Saifi Cuff – India. This stunning accessory is made by EcoVibe, a group of jewelry-making artisans from India! The cuff is a one size fits all piece because it is open-ended, which means it can be easily adjusted to fit any wrist size. The beautiful piece is made of brass. It will look amazing whether you pair it with casual or formal clothes! To keep it clean and shiny, you just have to wipe it off. 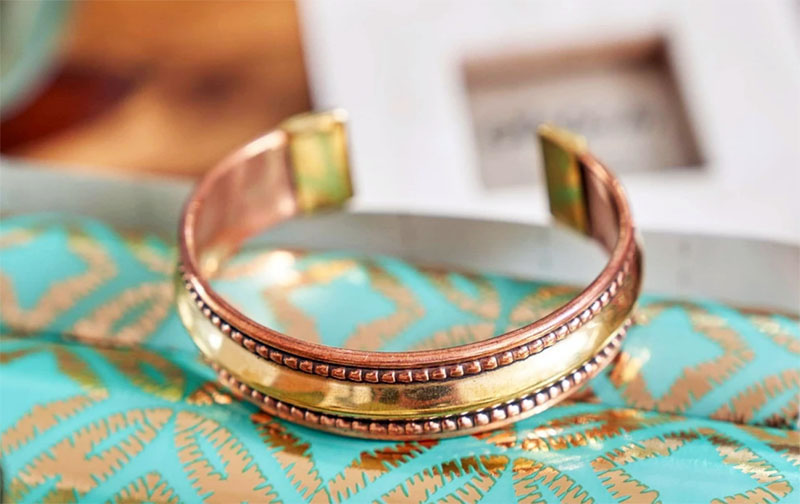 Noah's Ark Upcycled Mini Bone Frame – India. Another beautiful piece from India is this upcycled mini bone frame made by Noah's Ark Fair Trade. The back of the frame has a desk stand and several swivel clips that hold the backing in place. The frame measures 5″ x 5″, and it's 0.5″ thick. The upcycled bones are dyed in different colors, making this wonderful pattern for the frame. The frame will add flair to any desk or cabinet top! It can be used as a keepsake to frame special memories and pictures! 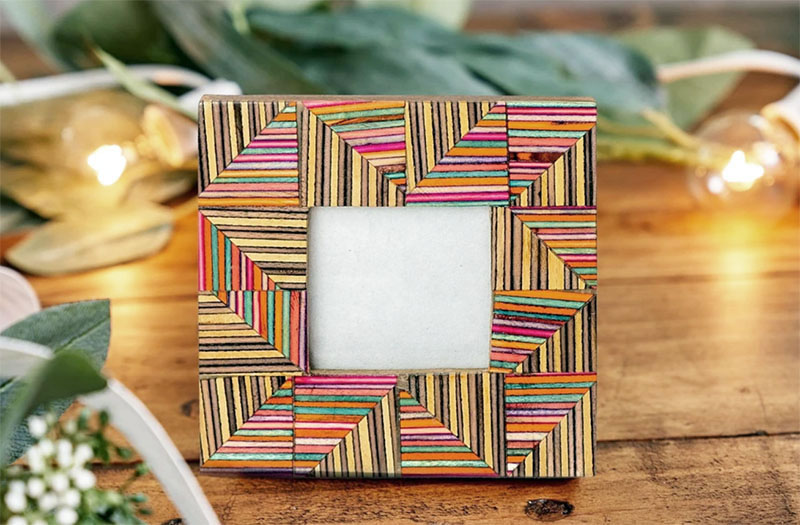 This month, GlobeIn taught us to be more appreciative of all the things around us, and we really grateful for all the beautiful items that we received in this box! Our favorite is the beautiful mug plus the delicious cocoa mix. I'm also fond of the nice cuff and the picture frame is simply perfect for my work desk. The palm leaf basket is another addition to our basket collection from Mexico. We also love the fact that this subscription introduces us to great artisans from all over the world. We can feel that they put so much effort, time, and love into making all of these!